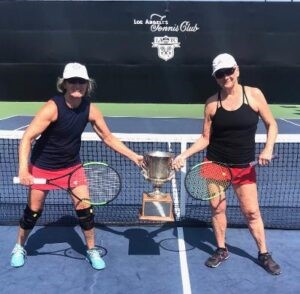 This LA Tennis Club Women’s 4.5 doubles team won two years in a row. This has been another amazing year for Jill Govan Bauman, with two rebuilt knees since her 20’s, and her tennis partner, Moira Kelly, who both regularly use Rixx Lotion as their sports lotion of choice.

Jill shared, “We won again this year, thanks to Rixx Lotion!”

LA Tennis Club has a very strong and talented level of tennis players, which means that the competition is always tough. Brackets are not set by age groups, so the participants in the women’s tournament start in the 20’s and go on up, nipping at the heels of club champions Jill and Moira (who are both over 55 Shh!).

Jill has used Rixx Lotion since it’s early beginnings, and it has allowed her to ski and play tennis at a high level throughout her entire adult life.  These two players have to face each other in singles tournaments often, but when they are on the court together, they have their own magic.

Both players use the Rixx Lotion daily as part of their preparation in training, for workouts or matches.  Rixx helps them keep their joints and muscles in shape before matches and helps them naturally control inflammation after difficult and enduring matches. Whatever level of player/athlete you may be, having Rixx Lotion in your war chest is a great asset.